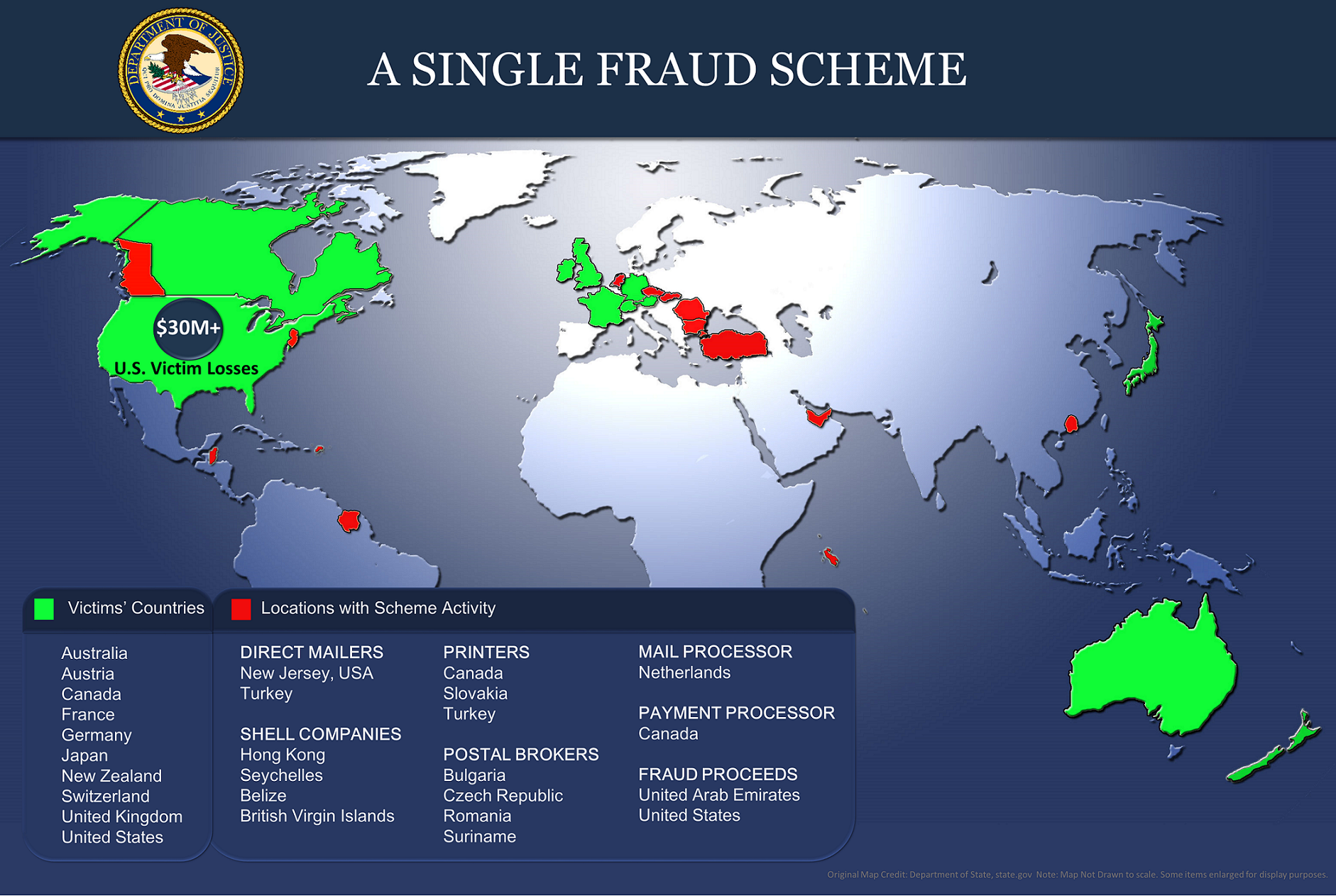 Attorney General Jeff Sessions and law enforcement partners announced today the largest coordinated sweep of elder fraud cases in history.   The cases involve more than two hundred and fifty defendants from around the globe who victimized more than a million Americans, most of whom were elderly.  The cases include criminal, civil, and forfeiture actions across more than 50 federal districts.  Of the defendants, 200 were charged criminally.  In each case, offenders engaged in financial schemes that targeted or largely affected seniors.  In total, the charged elder fraud schemes caused losses of more than half a billion dollars.  The Department coordinated its announcement with the FTC and state Attorneys General, who independently filed numerous cases targeting elder frauds within the sweep period.

“The Justice Department and its partners are taking unprecedented, coordinated action to protect elderly Americans from financial threats, both foreign and domestic,” said Attorney General Sessions.  “Today’s actions send a clear message:  we will hold perpetrators of elder fraud schemes accountable wherever they are.  When criminals steal the hard-earned life savings of older Americans, we will respond with all the tools at the Department’s disposal – criminal prosecutions to punish offenders, civil injunctions to shut the schemes down, and asset forfeiture to take back ill-gotten gains.  Today is only the beginning.  I have directed Department prosecutors to coordinate with both domestic law enforcement partners and foreign counterparts to stop these criminals from exploiting our seniors.”

The actions charged a variety of fraud schemes, ranging from mass mailing, telemarketing and investment frauds to individual incidences of identity theft and theft by guardians.  A number of cases involved transnational criminal organizations that defrauded hundreds of thousands of elderly victims, while others involved a single relative or fiduciary who took advantage of an individual victim.  The schemes charged in these cases caused losses to more than a million victims.

“Over the last year, the FBI has initiated more than 200 financial crimes cases involving elderly victims who were devastated financially, emotionally, mentally and physically. Picking up the pieces of these fraud schemes can be equally as traumatizing for the caregivers of these elderly victims,” said Acting Deputy Director Bowdich.  “The FBI reminds seniors and their caregivers to be vigilant. If any person believes they are the victim of, or have knowledge of fraud involving an elderly person, regardless of the loss amount, they should report it to the FBI.”

As part of the initiative, the Department’s Consumer Protection Branch, working with the U.S. Attorney’s Office for the Eastern District of New York and others, brought numerous cases this past week in a coordinated strike against more than 43 mass-mailing fraud operators, including criminal charges against six individuals.  In addition, law enforcement agents executed 14 premises search warrants from Las Vegas to south Florida, served numerous asset seizure warrants, and coordinated with the Vancouver Police in Canada, who executed over 20 warrants, including search warrants on business premises.

“The defendants targeted elderly and vulnerable consumers both in the United States and abroad, using U.S. addresses and the U.S. mails to try to legitimize their fraudulent schemes,” said U.S. Attorney for the Eastern District of New York Richard P. Donoghue.  “They sold false promises of life-changing prizes that never came true.  We will pursue the perpetrators of these mail schemes wherever they are located, and hold them accountable.”

These recently filed cases particularly targeted transnational criminal actors who collectively defrauded at least a million victims out of hundreds of millions of dollars.  Indeed, just one of the schemes prosecuted criminally by the Consumer Protection Branch operated from 14 foreign countries to cost American victims more than $30 million.  Click here for map showing a transnational, single fraud scheme.

Mass-mailing fraud inflicts hundreds of millions of dollars in losses to elderly U.S. victims each year.  Department prosecutors and U.S. Postal Inspectors have taken a comprehensive approach to combatting this fraud, disrupting and prosecuting individuals who manage the schemes, artists who draft the fraudulent solicitations, list brokers who supply victim lists, and individuals who collect victim payments. Click here for fact-sheet with cases on mass-mailing fraud.

Actions against other elder fraud schemes

Some examples of the elder financial exploitation prosecuted by the Department include:

Many of these cases illustrate how an elderly American can lose his or her life savings to a duplicitous relative, guardian, or stranger who gains the victim’s trust.  The devastating effects these cases have on victims and their families, both financially and psychologically, make prosecuting elder fraud a key Department priority.

The Department has partnered with Senior Corps, a national service program administered by the federal agency the Corporation for National and Community Service, to educate seniors and prevent further victimization. The Senior Corps program engages more than 245,000 older adults in intensive service each year, who in turn, serve more than 840,000 additional seniors, including 332,000 veterans.

Using its vast network operating in more than 30,000 locations, Senior Corps volunteers will communicate about elder fraud to potential victims across the country and will use their skills, knowledge and experience to educate their peers and caregivers about the most prolific types of schemes and how to avoid them. Click here for information on Senior Corps’ efforts to reduce elder fraud.

Kansas Attorney General Schmidt highlighted the cases filed by state Attorneys General targeting elder frauds within in the sweep period, and he emphasized efforts at the state level to combat elder abuse and protect seniors from fraud and exploitation.  He encouraged all of the state Attorneys General to devote enforcement and public education resources to preventing financial exploitation of senior citizens.

Exceptional assistance from foreign law enforcement partners amplified the effectiveness of the Department’s initiative.  The sweep announced today benefited greatly from the work of the International Mass-Marketing Fraud Working Group (IMMFWG), a network of civil and criminal law enforcement agencies from Australia, Belgium, Canada, Europol, the Netherlands, Nigeria, Norway, Spain, the United Kingdom and the United States.  The IMMFWG is co-chaired by the U.S. Department of Justice and FTC, and law enforcement in the United Kingdom, and serves as a model for international cooperation against specific threats that endanger the financial well-being of each member country’s residents.  Attorney General Sessions expressed gratitude for the outstanding efforts of the working group, including law enforcement action taken as part of the sweep by the Vancouver Police Department in Canada to halt mass mailing schemes that defrauded hundreds of thousands of elderly victims worldwide.

Elder fraud complaints may be filed with the FTC at www.ftccomplaintassistant.gov or at 877-FTC-HELP.  The Department of Justice provides a variety of resources relating to elder fraud victimization through its Office of Victims of Crime, which can be reached at www.ovc.gov.